10 hrs! 10 hrs its been raining unabated as i just peep out from the glass windows. No signs of a let-up watsoever as the roads,streets,shops n buildings take a battering.When it rains, it comes down really hard, in buckets.
The ghosts of 26/7 still havent died and each moment of that eventful day still remains deeply etched in peoples' minds. Ask anyone and he/she will have a story of theirs to tell u. Stranded 18 hrs on a flyover, fished out using ropes or spending half a day on the roof of a BEST bus..all this sounds like such bedtime story material, doesnt it??


'Its nothing new in Mumbai' you may argue ;doesnt it wreak havoc in the city every year? Fair say, 30-50 cm of rainfall a day is perfectly fine here, though at times, it may go to a 100. The city drains getting clogged are pretty normal .People wading through waist-high water at places is quite a common sight. Road transport is hit a bit. Local Trains run 15 min late (yeah if that happens in mumbai then u r absolutely sure that the city is facing a terrible downpour). Trade suffers. Houses are flooded. Money worth crores is washed away in no time. And people take refuge in their places of work for days, till the office canteens show signs of famine. 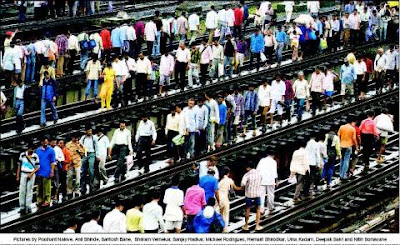 And still the people keep their mouths shut. No one cries for help. No one cribs or cries like cyclone or tsunami victims. See..havent u studied in school that 'Silence is golden' (or is it silver?))!! See.. there's not even a demand for a relief package of a cr rupees like other places (v wont get it anyways, so no big deal). Because ,u see, there's nothing new..yeh sab toh hota rehta hain yaar har saal." All this for a city which boasts of contributing a third to the country's exchequer.
And the reason why all this isnt new is because we have got so f****ng used to this life thanks to our "chalta hain" attitude and resilience infinitum. 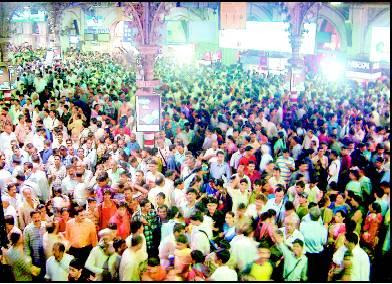 Flood or blasts, in mumbai, we practise something called " The Art of surviving" (no its different from " The art of living").Its not something practised or taught in yoga classes. Its done by normal mumbaikars quite subconsciously,daily in their lives. For instance ,fearlessly hanging out of a crowded fast-local with just a semblance of a finger-nail inside it (even a day after a train blast), living in a micro matchbox apartment for generations in a crowded suburb, evading a million potholes everyday, getting stuck in traffic snarls for hrs together etc etc.
Brand MUMBAI is remembered (Rather exploited) only on two occasions- one to showcase its role as the proverbial cash cow (its hard-earned money in the form of taxes obviously feeding the hungry vote banks in north india, feeding the sarkaari babus in delhi and making life comfortable for the thankless capital city, ).
And Secondly (most importantly) to talk about the courage and spirit shown by the brave mumbaikar who stares calamity in the face and battles against all odds even as the whole system struggles to come to terms . The "salaam mumbai" rhetoric is sung by babus (when what the city really needs is something more substantial) and then all's well.After all the mayhem as died down, life resumes as normal for the common man in the city, the very next day itself or the very next week in the worst of circumstances. As if nothin really happened!
Fverything is forgotten....till the next calamity strikes. Meanwhile, plans to transform Mumbai to Shanghai are drawn out. And we thought that the whole Shanghai fixation was just one of those over-ambitious,candy-floss dreams that our leaders get from time to time! 'Modelling Mumbai on Shanghai lines' they say.
Interesting, it seems, Mumbai has six sister cities in different parts of the world (maximum permitted by the Indian government).
Yeah, six really hot sisters!!
They are: Berlin, London, Los Angeles, Saint Petersburg, Stuttgart and Yokohama (Shanghai is not one of them incase you were looking for it!).

Hmm.. for the moment, modelling the city is the last thing on our minds as every soul tries his/her best to keep indoors and admires the marauding rains, from the confines of their houses for isnt it supposed to be Mumbai's most romantic season.

Your bark is quite impressive.. needless to say your loquacity is up there, but I am very impressed with your choice of subjects and their treatment.

You have been tagged... for details, refer to the post titled "Tagged!" on my blog- a-mavericks-foghorn.blogspot.com