Getting 'Trip'py - The Goa Trip

Our exams finally ended in the 1st week of March signalling the end of the academic schedule of the PGP programme. A series of 'lasts' filled up the FB space - people ranting about their last exam, the last presentation, the last assignment etc. as they heaved a sigh of relief at having completed the course in one piece.
Travel plans were on in full spree and herds of WIMWIians were disappearing in different directions. Some of the most preferred destinations being the northern part, the North-east and Goa.

It was Goa for the 5 of us - Menon, Tappu, Natty Boy, Veera and me, as we headed for the sun, sands and water.Although we had our doubts about making it to the station in time for the 9 am train (obviously having Natty in our ranks was not going to help), we did reach in time.

The long arduous journey started as we got accustomed to the cool environs of the 3 AC. Very soon the Poker set was out and what followed was numerous hands, countless buy-ins as fortunes fluctuated. The co-passengers looked on with interest as if Vegas had descended on to Indian Railways.
We reached Margao station early morning the next day.

The fast and the furious - Natty Boy:
If ever there was an award for the fastest decision-making club co-ord of a IIM-A student club, Natty boy would surely not make the cut even if he were the only one in the race. One whom even a tortoise could give a run for his money, as most of us had exited the train at Margao with our belongings, we realized that something was amiss. Natty hadnt exited the train and it had started to move towards the shed. Later we realized that Natty was apparently attempting a clean-up job of ensuring that none of our poker chips and cards were left behind in the train. This was to mark the series of many an amusing incident in Goa and subsequently down south in the western ghats. Also, the cap of his was a trusted companion, on occasions the only piece of garment on his body, a sight which left Tappu praying that he rather had been blind.
(Infact, Natty was refused entry by one of the beach shack owners because she thought he was not adequately dressed and that had led to a few foreigners fleeing the shack)

Prime among Natty Boy's early morning actvities was to check his IIM-A mail account, quite studiously, for any mail with the subject "Sangharsh reimbursement ". Umpteen internet hours spread over 4 days, countless phone calls (to Akash Shroff which had made him a popular household name) and many messages later, Natty was still left in the lurch.
If it was not Akash Shroff or Sangharsh, it was Ashwin - the new Niche co-ord, who grabbed Natty's mindshare, since he had been entrusted with the task of managing sponsorship funds (minus the spoils shared by Natty & Tappu).
And if it wasnt either of the above, it was good ol' wikipedia. For, Natty boy's German visa interview was a week away and Natty's romance for German cities, German football clubs and coaches, German beer and cuisine and the Nazis was bordering on fanaticism. We even had mock-visa interviews to simulate the atmosphere at the German Consulate, an attempt in which Natty failed miserably.

So started our hunt for anything and everything cheap and wallet-friendly - the cheapest hotel, the cheapest and value-for-money eateries, the cheapest rentals for car and bike. Being off-season, our negotiation skills were not tested much as the the 2 hotels we stayed in  - First near Colva Beach and subsequently near Anjuna Beach, did not exceed a measly Rs 300 per person.

The wounded tiger - Gokari
Each day started at 10 am for us except for Gokari (Our companion in the Goa trip who joined us late) who would wake up an hour early to follow a regular wound-dressing ritual like a wounded soldier. Technically it was not a wound, but a minor scratch sustained whle playing in the waters at Varca White-sand Beach. The sight of blood from it freaked him out enough for him to jump out of the water and ask the lifeguard for some first-aid. The lifeguard looked at Gokari as if he has just asked him the history of Goa. We deduced that perhaps this was the first inury in his life thus far. Below is the daily wound-tending sequence followed by Gokari with religious frequency:

to seal it and make it compleetly air-tight

This exercise was repeated a mnimum of 2 times a day. On occasions during the travel, the water was substituted by mineral water much to the agony of onlookers like us. 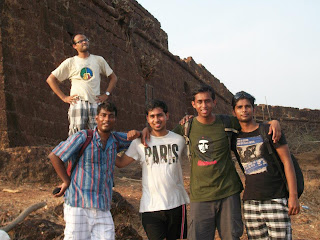 In course of our 4-day Goa tourney, Tappu doubled up as car-driver. An epitome of dare-devilry and adventurism normally associated with Bollywood stuntmen, he would always take the toughest, the least-travelled and the most dangerous route as if it were a mundane experiment for him. A perfect example of this was our trek downward from the top of Vagator fort. Conventional wisdom and straght thinking would have told us to go the same safe way we had come from. But Tappu wasn't going to have any of that. He was hell-bent on taking us along with him on the steep descent downward (which was leading to nowhere), a plan which made Gokari flee for cover citing his still fresh wound. Although we finally made it to the beach in one piece, it was just a sign of what was to come in the later part of our tourney. As evident from the pic above, he is quite adept at striking visionary poses. His valiant attempt to retrieve the bat from the speeding train (completely ignoring Natty boy sitting inside) will be remembered.

The leader - Menon
If ever there was any doubt regarding his consultant skills, Menon dispelled those with steadfastness. Armed with a laptop, at the end of each day, he would play with spreadsheets to ensure no one went scot-free in terms of the moolah to be paid. He protected and cradled the love of his life - "His Fast-track Shades", wherever we went. A stickler for good sea-food, he would touch upon each fish-item which existed on the restaurant's menu card while ordering, only to settle for a non-veg thali in the end.

Charlie - Veera
Veera played an important role in the group, as the the official butt (along wth Gokari) of most jokes.
He would himself at the receiving end of the obvious "Charlie" remarks. Most of these would be met by him with a timid 'LOL', a sign that he was more internet/chat savy than us. We instantly adopted the chat lingo like lmao, roflmao etc for ease of communicaton with Veera. We would constantly fnd him busy wth his cell phone, occasionally smiling away. At frst we had discounted it as his regular interactions with one/all of the angels. But later did we realize that he was sending promiscuous messages to a guy on campus and that sparks were flying thick and fast.
Veera's alleged hydrophobia ensured that he kept watch on our belongings on the beaches while we were inside the water. Infact one one such occasion on Varca beach, he made himself at home in the lone shack on a bottle-emptying spree to run a huge bill.

Our 4-day intinerary in Goa was as follows:

Day 1: Velankanni resort + A rented car and bikColva
Varca Beach - was a delight to the eyes since it appeared a virgin white sand beach completely uninhabitated by Indians (except for the owners of the lone shack). Firangs where having a ball here and it just did not seem like India.
Palolem Beach - The kayaking in the middle of the sea was a mind-blowing experience, not to mention our numerous failed attempts with the kayal falling over us and we consuming gallons of water in the process.

Day 2: Same resort and same rented vehicles
Dudhsagar waterfalls (which included a completely misguided de-tour for me and Menon wherein we came across "Welcome to Karnataka" boards)

Day 3: The morning when we checked out and changed 2 buses and a cab to reach the Anjuna Beach road to find a lovely resort-type hotel in the most unlikeliest of places, ust a minute away from the beach. The spic-n-span hotel called Poonam resort with a lovely swimming pool and a restaurant by the poolside and a big spacous room for all of us. Needless to say it was heaven ! 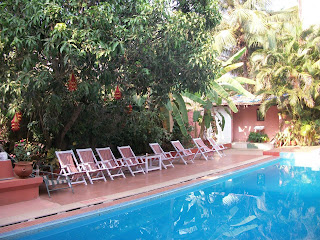 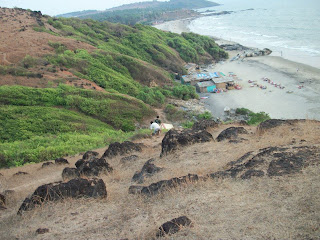 We had covered Anjuna , Vagator fort (Where we had a mini-trek to the top of the forts to the much-vaunted Dil Chahtha Hain point. The crazy vagabonds that we were, we choose a much steeper descent which led us down to a shack on the beach directly.) 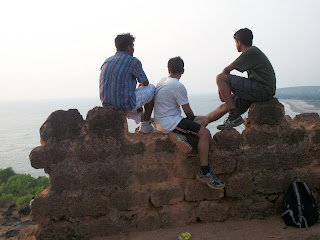 Day 4: We packed from the hotel and reached Calangute and had our share of water-sport fun.

By late-night we experienced the inevitable - bumped into 2 groups from IIM-A, one on the Calangute beach and the other on the Margao station. No damage was done.

And that night off we were on our way to Mangalore, in Sleeper Class I must add. So began the 2nd part of our exiting journey, down south as we treked in the western Ghats.