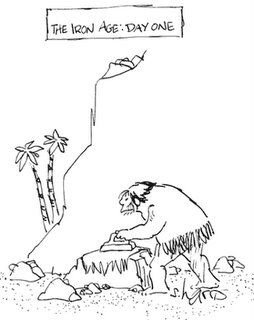 Funny one! this image isnt it?
It just wins hands down in my personal top ten rankings of the best caricatures, I have seen so far!

Each of us in our own way is "material"istic.
More so me,'coz thats my field of study.

I m sure the iron age man never got a chance to have a face-off with a certain regular phenomenon called "cycle test".

Writing a cycle test(CT) is like visiting a temple. A person goin to the temple simply reinforces the fact that he believes in god, irrespective of whether he goes to the temple for paying obeisance to the lord (or his ladies). Likewise, a bloke writes a CT merely as a reminder to himself that he is still in engg, whether he likes it or not. But ,both experiences,according to me, are spiritually enriching.
(Infact, the guy who prays before his "cycles" or sem exam stands a better chance of getting his prayers answered than the one in the temple ,'coz he's the more honest and serious of the two ! )

The cycle test times follow a very stereotypic and predictable pattern.The last week is chacterised by 13th hour finishing followed by confusion among the junta on what actually is the portion coupled with an very intense last week of study,which we are so much accustomed to, by now. It requires us to summon all our years of 'board exam experience" to sit and cram anything n everything in the notes without actually understanding or learning much. Amazing ain't it?

Either you are 'relatively' screwed or 'relatively' flyin high. You just gotta have a peep at the book just becoz your dept mate is doing it and your worried you'll be the ultimate loser.

This, when the students are seen thriving on class notes xeroxed from the top student of the class who sincerely sits on the first bench,day in and day out and takes on every piece of "knowledge" that the teacher passes on to us beloved pupils who are already flat over the desks.

There's one thing common in all our classes, books are "prescribed" by all gurus but the mere mention of the word library has everyone gasping, as if they are gonna be guillotined if they go there. 'Coz u never get your book. Dust-laden stacks pregnant with torn,useless 40-yeard old books are just good enough to get a nice ,cold sneeze out of you when u enter the stack rooms (though I would say that the reading room is never short on "Women's Era" mags.).
If the "prescriptions" aren't available in the market the "xerox" process is followed.